June 10, 2017
I had an interesting experience with my Resinable Trio - which was part of the Fiber Fusion travelling exhibition.  I sold it, not just once - but twice!!  Now that's mighty impressive at first glance, but then you think about it and wonder "how could you sell it twice??".

Well it turns out that one venue sold it and then there was a mix-up at another venue and somehow we forgot to put a "sold" sign on it and it sold again. What do you do in this situation?  Both customers had paid for the artwork.

SO my solution was to offer the 2nd customer a new set similar of sculptures for the same price.  Thankfully my customer was not only willing to accept that offer, but she is a fabulous silk painter herself and asked if I would use her artwork in my sculptures - which I happily agreed to!

Here is a sample of the fabric she sent: 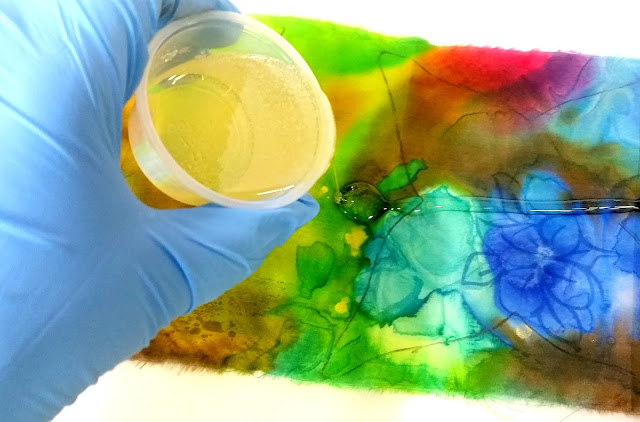 Gorgeous, and it made some fabulous sculptures!
And then as a thank-you for her flexibility, I created a 4th piece combining some scraps left over from creating her sculptures, with a piece of a painting I made a sculpture out of... and it turned into a beautiful floral sculpture called Lyon's Flower. 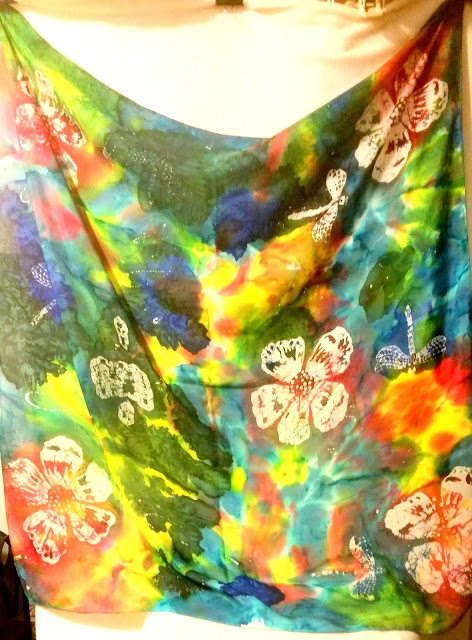 She was surprised and pleased and then surprised me with a wonderful thank you card which shows some of her beatiful artwork, and an incredible scarf!


So blessed to have Karen and a client and friend!!

Her scarves are available for purchase at The Schack Art Center in Everett, WA if you're interested! 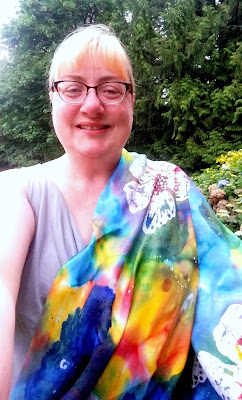 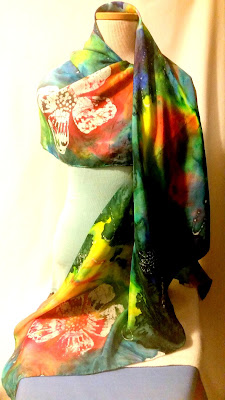 Popular posts from this blog

So You Want To Make Your Own Vertical Stovepipe Steamer?

August 06, 2015
I wrote a post on my other blog several years ago, but was just asked to create a new document for the Silk Painters group on Facebook.  So I thought I'd share it here!

Making your own Stovepipe Steamer is relatively easy to do and certainly cost effective!  To buy one new (and made specifically for silk paintings) will easily cost you over $1000 bucks.... but making one yourself can cost under $100 (mine was less than $50!).

I've had several people ask: Why do you want a Stovepipe Steamer?  Can't you just use a pot and steaming basket on your stove?
Both are good questions!
Yes you can use a pot and steaming basket on your stove.  But I personally, don't care for the idea of the chemicals/dyes/etc being in my kitchen. They are NOT good eats (to borrow from Alton Brown). Plus if you use a steaming basket in a pot, you have to constantly watch the water levels.  And you don't have a lot of space, which means you're probably only steaming 1 item at a time.  And …
Post a Comment
Read more

If You Grew Up Near Renton Washington, Maybe You'd Remember This!

September 21, 2015
I grew up in the Seattle area - moving around a bit, but staying within the general area.  One of the things my family liked to do, was visit Newberry's and Sears in Renton, WA.


I have VERY fond memories of the candy counter at Sears - where a kid with a quarter could buy a little bag of candies...yum!


Newberrys had a soda fountain (cafe) which was my mother's favorite place to get a hot dog - because they made buns out of folded, toasted bread.


But my very favorite thing to do - was to play
on the cement turtles outside.  There were little turtles and big turtles.  You could step from turtle to turtle and climb the big ones.  They were there for years, after newberry's left..and even after Sears left.  Then they disappeared.
BUT guess who I found on the grounds of the Renton Highland's Library??  YUP! One of the original turtles!!

So you're thinking of making your own World Globe Bowl or Lampshade?

April 04, 2015
So you're thinking of making your own World Globe Bowl or Lampshade? (a series of 3 tutorial posts explaining how to select a World Globe, make a lampshade, and make a bowl).